Extraordinary Ministers Of The Eucharist

The Liturgy Office of the Bishops’ Conference of England and Wales says this about Extraordinary Ministers of the Eucharist: 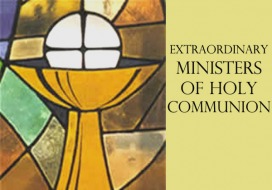 Bishops, priests and deacons are the ordinary ministers of Communion. If a large number are to receive Communion, the ordinary ministers will frequently need assistance in distributing Communion, so that the Communion rite is not unduly long. It will regularly be needed when Communion is given under both kinds, the form of Communion in which the Eucharistic banquet is more clearly signified. This assistance is given by extraordinary ministers, be these instituted acolytes or commissioned ministers of Communion, formally commissioned for a given period or, in case of necessity, deputed by the priest celebrant for a particular occasion. These various ministers serve Christ present in the assembly by ministering his Body and Blood to their brothers and sisters. They also serve the unity of the worshipping community by taking Communion to those members who are prevented by sickness, old age, or other cause from taking part in the gathering for Mass. In accord with an ancient tradition, it is appropriate for Communion to be taken directly from the Sunday Eucharist to the sick and to those unable to leave their homes.

Holy Communion is under only one kind at the moment so the Rota for Extraordinary Ministers is temporarily suspended.