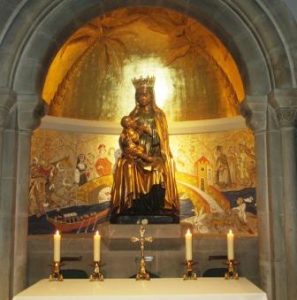 The detailed history below is summarised in an attractive Timeline .

The inquest into the death of Joan de Clare, Countess of Gloucester, in 1307 mentions the rent of a fishery called Chapell Water.  The Earls of Gloucester held the Manor and this land, and a nearby island was leased by the Manor to Notley Abbey who had care of the Shrine.  The inquest also mentions Walter Herdegrey paying rent for a virgate of land to the chapel of the Blessed Mary of Caversham.  A royal survey in 1551-2 makes reference to lands close to the Thames, which were probably the lands given by William Marshall to Notley Abbey, as “a parcel of land called Capull”.  When excavation work took place at Dean’s Farm towards the end of the 20th century, experts from Reading Museum identified a piece of lead found in a well as the remains of a baptismal tank.  It was of a considerable size and showed the “Chi-Rho” cross symbol of Christianity.  Burnt building debris was also found in the well, and so perhaps this was the site of the original Shrine.

The reasons why people came on pilgrimage is unknown.  The first definite historical record is from the year 1106, when Duke Robert of Normandy presented to the Shrine a relic of Christ’s Passion which he had brought back from the First Crusade.  In 1162 the care of the shrine was entrusted to the Augustinian Canons of Notley Abbey, near Aylesbury, one of whom was always resident at Caversham as the Warden of the Shrine.  Although the great Reading Abbey was only a short distance away across the Thames it never owned or controlled the Shrine.  However the Abbey did help build the first bridge over the river, with a chapel to the Holy Spirit on the Reading side and another dedicated to St Anne on the Caversham side; there was also a holy well, known as St Anne’s Well, still to be seen today at the top of Priest Hill, Caversham.

Throughout the Middle Ages the fame of Our Lady of Caversham spread throughout the country and pilgrims came not only to pray, but also to present votive offerings to the Shrine, so that by the 15th century the statue was plated in silver.  In 1439 Isabella Beauchamp, Countess of Warwick, left 20lbs of gold to be made into a crown for the statue.  Kings and Queens of England travelled up river from Windsor to visit the Shrine, the last being Queen Catherine of Aragon who came on July 17th 1532 to pray to Our Blessed Lady while Henry VIII pressured her for a divorce.

Henry’s break with Rome meant the destruction of all religious houses and shrines so, on 14th September 1538, Dr. John London, the government agent, arrived at Caversham and in a single day closed down the Shrine, stripped it bare of all its religious property and ended over five hundred years of religious devotion.  The statue was sent up to Thomas Cromwell in London where it was burnt.

Revival of devotion to Our Lady of Caversham began in 1897, the year following the foundation of the Parish of Our Lady and St. Anne. Fr. Haskew, the parish priest, wrote the first account of the Shrine in modern times, but mistook the shrine chapel for the chapel of St Anne on Caversham Bridge.  When a new bridge was built in the 1920s, stones from the foundations of the original bridge chapel were given to the parish to be incorporated into a restored shrine.  At that time there was a fine white marble statue of Our Lady and Child given to the church to encourage devotion to Our Lady; it is now in the church, in the Cenacle.

In the Marian Year of 1954 the then parish priest, Fr William O’Malley, decided that a suitable shrine should be built.  A stone chapel, in the Norman style was built, and a large oak statue of Our Lady and Child, about 500 years old, from Northern Europe, was purchased (reputedly found in an antique shop in London).  This lovely statue shows Mary nursing the infant Christ; her cloak is gilded, her dress, originally blue and silver, and her face are now dark with age, but her look of tender and dignified love is truly beautiful, inspiring and prayerful.  The renewed Shrine of Our Lady of Caversham was solemnly blessed and dedicated by Archbishop Francis Grimshaw of Birmingham in 1958.  The stone floor of the chapel is below the level of the church to allow for better viewing of the statue from the body of the church, and also so that passers-by may kneel at an angled window outside the church, to see the statue without entering.  To complete the link with the Medieval shrine, in 1996, to celebrate the centenary of the parish, a gold and silver crown was made for the statue, and blessed by Pope John Paul II during a parish pilgrimage to Rome.  The statue was solemnly crowned by the Papal Nuncio, Archbishop Barbarito, on 20th July 1996.

Today groups and individuals come regularly to pray to Our Blessed Mother at her Shrine.  During the Millennium Year the Shrine was one of the recognised places to obtain the Holy Year Indulgence.  We continue the ancient tradition of welcoming pilgrims, and the Cenacle, attached to the church, has facilities for pilgrimage groups.  For further information about the shrine, or opportunities to visit, please contact the parish office.